Today’s guest has been described by Forbes as “a redheaded, tattooed Tina Fey with a special weakness for four letter words.” You’ll see why when you watch this episode. It’s a good thing our shows are uncensored and unedited to give you the full effect. And I’m not talking about in a “creating hype” sorta way because that’s not how we roll. We hand-selected Erika Napoletano for her no BS, straight-talking approach harnessing the power of unpopularity that has helped countless business owners and entrepreneurs get from where they are to a better version of fuck yeah.

Share Some SHUT UP Love –> The most radical thing you can be is yourself because everyone else is already taken. – @redheadwriting on #shutupshow (click to tweet)

ON FINDING YOUR F-BOMB: I haven’t always been comfortable in my own skin. The process of getting there was 37 years of fucking up and trying to be everybody except for exactly who I was. When people responded with the most energy and enthusiasm about anything I had to say, I was open, honest and being nobody but exactly who I was and exactly how I felt. When you get that kind of permission to be who you are, it’s really intoxicating because we don’t really get that anywhere else in life especially if we haven’t put the right people in our lives or put ourselves in the right environment.

ON REJECTION: I stand by the fact that not every one is gonna like me and if I’m building what I’m building and I find everybody likes it, then I’m doing something wrong. I haven’t pissed off enough people. I haven’t pushed the envelope. I haven’t gone to that line and dared to cross over it. That means when I don’t do that, I’m not growing. I’m not looking for the next thing. If you do the same thing over and over again, you’re a one trick pony. I’m not interested in being a pony. I don’t particularly care if people have a problem with who I am or what I say. What I do care about is how they express it.

ON FEAR: There’s a big life change. I’m focusing on the performance part of my brand. I’m going to study at The Second City training center in Chicago to learn how to use laughter to help people get from where they are to a better version of fuck yeah. It’s hard to admit because when people are looking at you because they think you have it all figured out, I have to keep reminding myself that I am a work in progress. I’m afraid that I’m not fuckin’ funny. I’m afraid that it’s all tit jokes and fart jokes and that it’s gonna all fail miserably. That I might not be who I need to be to make this a success. I look at the fear and I go “I’m 40 fuckin’ years old and if I’m gonna do this at all, it’s gonna be now.” I’ve spent since 2004 saying it’s not important to me. I don’t believe it’s ever too late. I’m packing up my life. I’m buying a house in a town I’ve never lived in and investing. I realize that I could have done this with a net but if you’re working with a net, I believe you’re never gonna fully invest yourself if you’re waiting for one thing to manifest before you leave something else. It’s a pussy move. I’m abandoning the pussy move and diving in. It may work out. It might not. But fuck it, come on, let’s go for a ride.

I have a filthy, dirty mouth. It’s just the way I talk. It’s funny when I hear people say “I couldn’t get past the swearing” and I’m like “just go fuck yourself.” – Erika

Whatever works for you is what works for you. That’s what being unpopular is all about. It’s not setting out to piss people off or be an asshole. That’s being unlikable. It’s just embracing the fact that what you’re building is for a very specific audience. It’s about honoring yourself and your audience. – Erika

We’re not gonna go shank each other in the parking lot because we’re different. We celebrate each other’s differences and these people are still our friends, just like our customers. – Erika

You can still be snarky and funny and witty and wry, but you can’t do it by taking someone else down in the process. You have to respect that person’s opinion. – Erika

The environment we create for ourselves is hugely important. It’s a combination of where we work and how we work. – Erika

I never look at anything in my life as a given or taken for granted… how am I participating in this in the way it deserves my participation and how can I do better? I always wanna do better. – Erika

Get Erika’s book on branding: The Power of Unpopular

Join Erika’s Facebook community where they cover tough issues and have a shit load of fun. 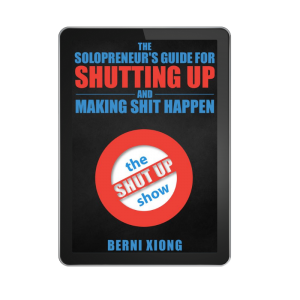